This coffee was roasted with espresso preparation in mind, yet it is suitable for filter usage when a heftier coffee is something you like.

We recently realized we’ve never offered a coffee from El Salvador, which is a shame since it is such an amazing origin with a wide array of flavors. We came across this lot and it seemed like destiny: a very well processed natural with the delicacy and acidity from the cherry still intact. From a farm with a long history and family run we offer this brew with bright apricot and floral orange blossom, sweet stewed apple and a rich and chewy brownie base. Sirupy espresso or decadent milk beverage, it will blow you away in both.

A note from our supplier, Nordic Approach:

Finca San Francisco is a large farm of 294 hectares that has been divided into “tablones”. Cherries from each tablon are kept separate for improved processing and preparation. The tablones range in altitudes from 1200 masl up to 1700 masl. We buy coffee from several of the tablones in the higher altitudes like Tablon San Ramon, Tablon San Antonio, Tablon Las Ranas, Tablon La Independencia, Tablon El Pedregal, Tablon La Cabana, and Tablon Loma Linda.

This farm is part of a project with an El Salvadorian producer, Jose Antonio Salaverria and his two sons Andres and Jose Antonio, the younger. They are 6th generation coffee producers, their ancestors started growing coffee in Huachapan. Jose Antonio Senior’s father offered him a house in 1970, but Jose Antonio asked for a farm instead. He was given Finca Los Nogales, which remains in the family, and is one of the farms supplying us with coffee.

The coffees from the different farms are all processed at their beneficio (central mill). They bought Beneficio Las Cruces in 1990 and have made significant improvements since then. Much of their success is due to their passion for coffee. They are hard working and realistic, patient and focused on quality to make their business sustainable. They have also built a great team. Jose Antonio considers his staff as the company’s biggest asset.

When we started a quality program with the Salaverria family in 2011, they began lot separation in earnest. Most importantly, they began separating several small farms and blocks with the better altitude, quality potential and growing conditions. This way we could buy from the farms located from 1400 to 1750 meters above sea level. This is regarded as a good altitude in El Salvador where it is very hard to grow coffees above this altitude. In addition to lot separation by farms and blocks (tablones), we are also working with the Salaverrias to optimise quality by experimenting with processes to prepare a different and value added product through fermentation and soaking, as well as the drying methods. The Salaverrias grow a number of different varietals at their farms. The majority is still a mix of the traditional Bourbon Elite, and something they call Hibrido San Fransisco which is a mix of Bourbon Elite and Pacas.

The most impressive thing about coffees from the Salaverria family is the overall quality of picking: deep blood red and uniform colour. Considering the volumes they grow, it is pretty amazing!

The coffees are, for the most part, processed based on trials and adjustments we made together at the wet mill. They use eco pulpers called Jotagallo that manage to remove about 80% of the mucilage. Their standard procedure is to take the parchment from the pulpers directly to the patio for drying. We have decided to soak most of our purchased coffees overnight for ten hours after pulping as we believe it will make the coffee even more elegant. We feel the cup is brighter and cleaner, seems like shelf life can be increased and the acidity profile more distinct. The cups tend to be more closed in the beginning, but they normally open up some months after picking. We tend to like these more. The coffees are then dried on clay patio for up to 15 days, or on drying beds in sun or under shade.

We are slowly increasing the purchase of naturals as well. The Salaverria family has a long tradition of producing naturals that are a much higher quality than many others from Central America. They have good weather conditions for naturals: a dry climate, and not too hot. The family dry most of their naturals on patios at higher altitudes than Las Cruces. We believe slower drying on African beds decreases the flavour of ferment and pulp, and contributes to a cleaner and more complex profile. We want to improve it, and we have done some experiments with shade dried naturals on raised beds the recent years. The result is a delicate coffee with hardly any pulpiness at all.

Most of these coffees are of what the Salaverrias call the San Francisco variety—that’s a hybrid of Pacas and the old Bourbon Elite, developed at the farm. Some of the blocks do contain old Bourbon trees, Bourbon Elite, and a mix of Bourbon and Pacas. Occasionally you can find Pacamaras as well as Catuai, Caturra and Catimors. They have recently established blocks and gardens experimenting with new and exotic cultivars.

Our coffee comes in craft paper bags which contain a plastic liner on the inside to guarantee freshness of our coffee. Please dispose properly at your local plastic trash container. The Village Coffee is roasted fresh every week, and best consumed between 1 and 6 weeks after roast date. Store your coffee in a dry, dark and cool place, avoid the fridge. 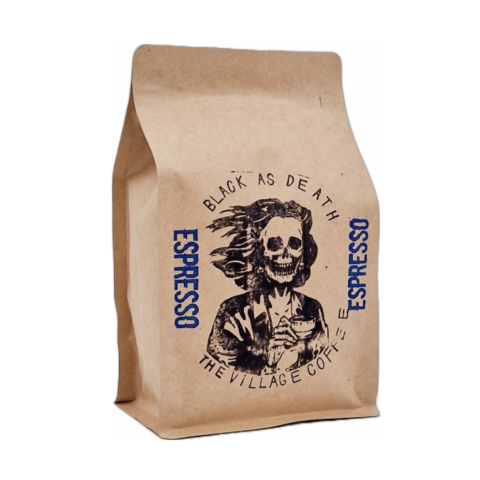