This decaffeinated coffee is roasted as an omni. Meaning you can use it to make either espresso or filter, and will taste great in both.

Although we have been wanting to offer a decaffeinated coffee since day one of our roasting journey, we had yet to find one that ticked a couple of boxes for us. In traditional decaffeinated coffees lots of flavors are removed together with the caffeine, sometimes even with certain chemicals. Added upon that it’s a process done by big companies which raises the price, and thus to keep the price low cheaper coffees are being used, both affecting the farmers income and the quality of the coffee. Lastly because the coffee is being shipped over multiple times extra it’s out of season before we can get our hands on it.

This coffee is the first we ever tasted in which we were actually excited to offer it, plus we approve of the steps it took to get to us.

A note from our supplier, Primavera:

Raul Sanchez of Finca Loma Alta is a leader in the coffee community of Jalapa, and this outstanding farm produces some of the best coffees we’ve had from that region. Because water can be scarce in Jalapa, Raul’s coffee is delivered to us as cherry the same day that it is picked. These lots are remarkably uniform, a sign of careful picking! Our team processes them in Fraijanes and prepares them for export.

Raul also works with the Del Paraiso producer organization in Jalapa, which works to strengthen the local community by finding specialty partners such as Primavera and helping producers access those buyers. He’s committed to raising the acclaim of Jalapa’s specialty coffee producers to benefit the entire community. Raul has set a goal for himself to continue to improve the quality of his coffee year after year.

Decaffeination processes using carbon dioxide (CO2) differ in their details. All take advantage of the fact that carbon dioxide, when compressed, behaves partly like a gas and partly like a liquid, and has the property of combining selectively with caffeine. In the most widely used CO2 process the steamed beans are bathed in the compressed carbon dioxide and the caffeine is removed from the carbon dioxide through charcoal filtering, just as it is in the water- only process. However, the flavor components remain in the bean throughout the process, rather than being soaked out and then put back in again, as they are in both the Swiss Water and the indirect solvent processes.

Since carbon dioxide is the same ubiquitous and undisputably “natural” substance that plants absorb and humans produce, and since, in most versions of the CO2 method, the flavor components remain safely in the bean throughout the process rather than being removed and put back in again as they are in the Swiss Water process, carbon dioxide methods would seem to be the decaffeinating wave of the future. 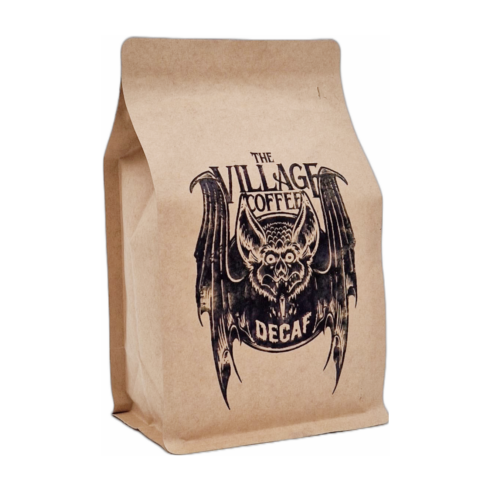